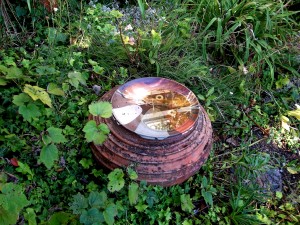 Today was not one of those days, but One of Those Days.  Yesterday, as I watched the tiny, greenery- yallery birds we call silver- eyes in the trees, hunting for insects and the like, I thought how I hadn’t seen the cock pheasant for months. He must have found another home, I thought.

When I awoke this morning I jumped out of bed and looked out of the open window to the sea as usual. There, right below my window, was the pheasant, in the garden bed with the bromeliads. He slowly pecked and ambled his way down through the vegetable beds to the petanque court, and then sauntereded off down the path into the wild patch. A moment earlier or later, and I would have missed him. Do I believe in coincidences, or did the pheasant pick up my wave-length?

It was one of those glorious late summer days. The colours bright, the air sparkling.  In the morning I rendezvoused with two old friends at an art gallery in the next village, to see an exhibition in a barn in the orchard. The gnarled branches of the old fruit trees were blanketed in fluffy celadon-green lichen, and hung with knobbly green quinces and pink and yellow apples. The barn was full of pottery, paintings, sculpture and furniture.

Robin knew one of the painters, who told us a dealer had wanted to see her work, so the painter had suggested that the dealer come to the exhibition. The artist led the dealer into the barn, and before she could show off her vividly coloured abstract flower paintings, the poor painter told us with some chagrin, that the dealer had instead pounced on a set of black and brown geometrical abstracts, and said she’d buy the lot. These black and brown works of art were composed of cow dung, clay and other mixtures, and smelt richly of a farm yard!

After a cup of coffee by the river, and a whip round the gallery there, we drove on to Tawharanui National Park, and the “Exhibition in a Woolshed”. Never has the sea looked so blue, the islands so green and purple, and the sands so white. The rolling hills were burnt gold in the flaming sun, and the gum trees which lined the last stretches of the dusty, winding gravel road gave us grateful dappled shade.

At the National Park we enjoyed the pungent smell of a real woolshed, and savoured the integrity of the wooden slats and fences, smoothed and polished by the hands of generations of sheep shearers – hands – no doubt, impregnated with oil from the fleeces. Another collection of absorbing paintings, pottery and sculpture, and then a walk around the sculpture park edging the turquoise sea.

The day flowed from one treat to another. Late in the afternoon we arrived at another cafe for lunch, exhausted with art and walking in the midday sun. We sat outside in the shade of the trees, where we could see the waterfall. We go back through twenty nine years of gruelling growth courses, endless lunches, regular birthday parties, shared experiences and watching our children grow up, marry, have their children, break-up, divorce and struggle on, in sickness and in health…

Words which were a wonderful antidote to artistic pretension and cow dung! As we left the woolshed, outside in the sheep pen there was a battered old farm noticeboard which read:

Sheep seem to be in my consciousness at the moment. Last night, I’d been reading an artist’s account of her decision to find a lamb to photograph while she was painting Jesus, so she’d get it right. She went to a local market, but saw only a sorry collection of scraggly mixed breeds – no lambs. She was about to turn away when a sparkling white ewe emerged from the flock and approached her. She was pregnant.

The artist decided to buy her, and the dealer told her the sheep’s breed was a ‘mouflon’. On the way home, she was suddenly struck by the fear that the sheep might be some sort of new hybrid which had not existed when Jesus had been on earth, since she had never seen a sheep like her, in spite of growing up on a ranch.

After establishing the sheep in her new home, the artist set off for the library, where she found that the mouflon was the oldest domesticated breed of sheep in Europe, and had  been herded in the Middle East two thousand years ago. Since they were living in the US, it was an amazing synchronicity to find the exact type of sheep she needed, especially since she hadn’t known that she did need it!

The perfection of the interlocking factors in this story reflect a little of how I feel today. It’s as though I know in my heart, and not just in my mind, that all is well, and that if we let go trying to make the right thing happen, the perfect thing happens. And it may not be what we planned or thought we wanted. This means a sense of peace, a calm, and a certainty. There is no need to keep striving, because when we surrender, life falls into place anyway.

And I’m learning to let go the distinction between the earthly and the spiritual. There is no distinction. Everything is sacred. So the laughter of today has the same value as this morning’s early meditation. As I hummed the pop song:  “Take my heart to higher ground’, a la Streisand, I felt it was as sacred as a Bach cantata. Feeling that every moment has a hidden significance, means the days are lived at a particular level of commitment

Making the most of each day, and knowing that the sum of these days add up to life well lived, is its own reward, and so in the words of that old Jewish saying, we can go on our way stringing pearls for heaven. And maybe try for heaven on earth… and carpe diem.

Browsing through Sally’s latest blog at mybeautifulthings@wordpress.com , I saw her picture of lunch at Falmouth – salmon fishcakes, spinach, poached egg and Hollandaise sauce. My taste buds sizzled, and I thought this is what we’re going to have for supper. I actually had some salmon, plenty of Agria potatoes – best for mashing, and all the trimmings – fresh eggs, spinach in the deep freeze, and a recipe for a quick hollandaise sauce.

Here’s my recipe for the quick hollandaise sauce. Blend the juice and zest of two lemons, four egg yolks and two teasps of mild mustard.  Melt the butter, and keeping the motor running, pour the butter into the eggs in a slow stream. Process until just thickened and no more. Season to taste, and keep at room temperature until using it. This makes two cups. Extravagant and delicious!

I used fresh smoked salmon and dill in the fish cakes and rolled them in flour before frying them in a mix of butter and oil. I think if I was feeling threadbare, a tin of red salmon, or even pink salmon jazzed up with plenty of herbs would work.

I am done with great things and big plans, great institutions and big success. I am for those tiny, invisible loving human forces that work from individual to individual, creeping through the crannies of the world like so many rootlets…

William James 1842 -1910   Sometimes called the father of American psychology, and also best known for his book ‘The Varieties of Religious Experience.’