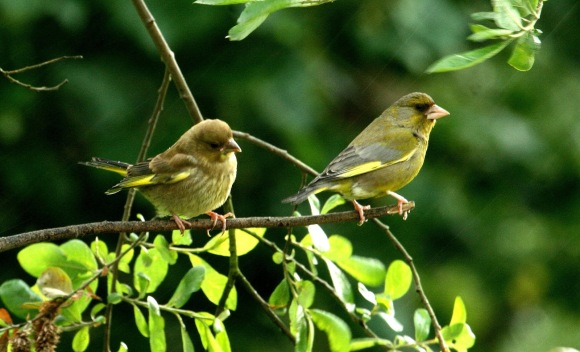 It was a term of derision thirty years ago when someone referred to me mockingly as a ‘brown- rice greenie’. These days however, eating brown rice is respectable and being green is mainstream. But I’ve just discovered there are different degrees of greenery!

Feeding the birds has always been a pleasure of mine, but now I find I’m feeding the wrong birds!  This can be construed as non-environmentally friendly since it encourages non- native birds in a place where only native birds are valued… meaning places where others are trying to return the area to its pre-European pristine purity.

Ironically, the increase of non-native species where I live is a result of an ongoing and increasingly successful predator control programme which has meant many more fledglings survive since there are now fewer rats to prey upon the bird populations. But my feeding of the wrong birds – green finches, quails and chaffinches around our little potted garden –  is sometimes perceived as a problem!

So though I thought our environmental footprint was a reasonably small one, in that we have a compost loo, which means using at least thirty per cent less water than if we had a normal loo, we only run one car, we don’t use up jet-fuel by travelling overseas, so don’t participate in producing the prodigious gas emissions of jet exhaust, we ‘re not really very green in other people’s eyes.

We eat very little meat, tending to the organic chicken spectrum and free-range eggs, and I never buy fish since we over -fish the oceans so dreadfully, but in the scales of green virtue these private attempts to preserve the planet don’t seem to balance out the detrimental practise of feeding introduced species of birds.

I was staggered to read that during a recent typhoon China recalled its fleet of more than 18,000 fishing boats in the interests of safety. My mind boggled! Eighteen thousand boats going out every day to strip the seas!  Then there are the fishing fleets of all the other seven countries surrounding the South China Sea, not to mention the vast fishing fleets that range across all the other oceans of the world.

When David Rothschild replicated the voyage of the Kon-Toki across the Pacific a few years ago, they couldn’t live off the ocean like Thor Heyerdahl’s crew seventy years back … there were no fish left to catch. In the waters surrounding this remote country, Japanese, Taiwanese, South Korean and Soviet fishing vessels trawl perpetually … the Japanese still indulging in whale hunting to the despair of many who live here.

The fishing fleets of Europe have so denuded the waters in the north Atlantic, that cod, once the cheapest and most plentiful of fishes when I was a child is now a delicacy… so yes, in this household, fish is off the menu.

Much of our house is built of re-cycled materials, even the foundations are concrete set in the big plastic water bottles in which we had to buy water when we first came here, and were waiting for a water tank to arrive. Whenever neighbours undertake renovations, we’re the often recipients of their unwanted or extra insulation, wood, kitchen fittings, etc.

My partner uses an environmentally friendly manual earth re-structuring implement for all his earth-moving work on site, which requires no fuel to operate, makes no noise- polluting sound and cost very little compared to a digger. This spade is one of our most useful possessions, and has slowly changed the contours of this building site with no impact on the environment.

But degrees of green-ness mean that in some doctrinaire eyes we probably aren’t green at all. I grow flowers instead of vegetables, and try not to feel guilty about it, telling myself that it’s good for the bees anyway. But this brings me to another degree of green-ness.

Being a vegan is not an option for me, attractive though the idea is, of being able to exist without exploiting any form of life. (I can’t digest soya beans, which provide much needed nutrients in a non- meat, non- egg non-dairy diet.) But now I read that even vegans can be up against it in this strange interlocking world, where so many natural processes now seem under threat from our various polluting or destructive modern practices.

The vegan – vegetarian options of eating avocadoes which provide so much badly needed protein in a vegan diet, drinking almond milk in preference to exploiting cows for dairy food, and eating almond meal for those needing gluten free options are now suspect apparently.

Because both avocadoes and almonds for western markets tend to be grown in California, where bees are now rare forms of life, bee-hives are carted around from different growing areas to pollinate the avocado and almond trees. No-one is sure at the moment if this is detrimental to the well-being of bees, but it’s a good guess that they may be conscious and dislike these upheavals. So if you’re a vegan because you don’t want to exploit or cause distress to other forms of life, suddenly there’s a new dilemma.

Up till now I have withstood the muted dis-approval of supermarket check-out staff when I opt for plastic bags instead of using my collection of hessian shopping bags and old baskets. This is because I use those despised plastic bags to line wastepaper baskets and for non-compostable rubbish to go into the rubbish bin, including the endless plastic wrappings which come with everything, from jars of vitamins to cucumbers and bread, packets of bacon or biscuits.

Now plastic bags are banned from our local supermarket I ask myself what we wrapped our rubbish in when it went into the dust-bin before plastic bags exploded into our lives, and I realise we used sheets of newspaper. But newspapers are almost as environmentally unfriendly as plastic bags in that they require acres of trees to be chopped down every day. World demand for trees for paper has risen by four hundred per cent per cent in the last forty years – two and a half million trees are cut down every day.

In the USA in one year, two billion books, three hundred and fifty million magazines, and twenty- four billion newspapers are published. To get the paper for these books requires consuming over thirty- two million trees. And those figures don’t include the huge output of books and newspapers everywhere else in the world.

The average American uses seven trees a year in paper, wood, and other products made from trees. This amounts to about 2,000,000,000 trees per year! Apart from papermaking, unbelievably, more than two hundred thousand acres of rainforest are burned every day. That is more than one hundred and fifty acres lost every minute of every day, and seventy-eight million acres lost every year!

The profligate destruction of trees is so awful that I rarely buy new books any more, and second hand book-shops are my go-to place for reading matter – just finished John Mortimer’s ‘Paradise Postponed’ from the St John’s Op Shop, and before that a fascinating book about Mary Magdalen found in the re-cycle shop at the local dump. Gibbons ‘Decline and fall of the Roman Empire’, from the Cancer Charity Bookshop is waiting in the wings! Can I justify writing any more books myself? Better stick to blogging.

Trying to reconcile the conflicting claims of environmental correctness is one of the ethical challenges of our day, and we all have different points of view, depending on whether one is a western greenie, a third world farmer, a fisherman, a miner, or even a writer! Intelligent, sensitive and aware people who compost, grow vegetables and native plants, support environmental projects and live on a green moral high ground, yet can own several cars and enjoy a rich calendar of overseas travel are as inconsistent as I am.

I feel that my environmentally incorrect pastime of feeding non-native birds can be seen as another facet of the green debate in these times of the Sixth Great Extinction. (Greenfinch populations have plunged by 59 per cent in the UK in the last ten years)

I’ve discovered this tasty recipe in an old scrapbook for a sauce to eat with raw vegetables or a baked potato… all it needs is quarter of a pint of mayonnaise, half a green pepper chopped very finely, two sticks of chopped celery, a cup of finely chopped cucumber, clove of garlic, crushed with some salt, six table spoons of tomato sauce/ketchup, and a table spoon of horseradish sauce. Mix all the ingredients together, add salt and pepper if needed, and chill before serving.

“I saw a Divine Being. I’m afraid I’m going to have to revise all my various books and opinions.”

21 responses to “Fifty Shades of Green”