We are all witnesses 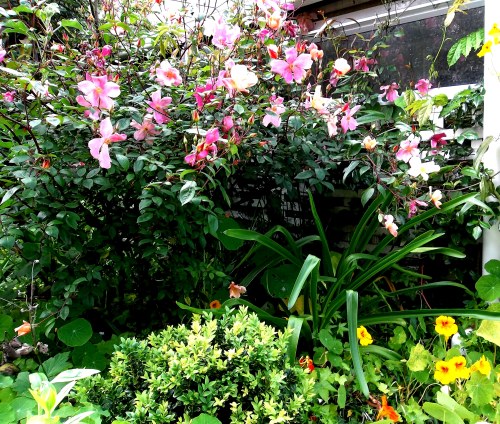 Who would have thought that when a group of murderous men attempted to kill a fourteen year old girl that they would have made her a global heroine and given her cause world-wide coverage?  Malala Yousafzai is extraordinary.  It’s hard to believe that a school girl should have become such a threat to the oppressive policies of the Taliban that they should try to suppress her and her campaign for women. And so heartening to know that two years later, in spite of her terrible wounds, she is living in peace in England, has written a book, and is still campaigning for the right for all women to an education.

Her poise, beauty and intelligence as I watched her fluently explaining the situation on TV and how she came to be such a campaigner was so moving, that it seemed even the interviewer  was nearly in tears. The next day she had tea with the most powerful man in the world and fearlessly asked him to stop killing her people with drones – that anyone should have to ask – since when has it been OK to kill innocent citizens of countries who are allies – and is reported to have told the President that it was counter-productive and caused resentment. A simple enough deduction that one would think the highly educated men in the White House could have reached for themselves!

But what is so exciting about sixteen year old Malala is that she is free to spread her message and to resist oppression and tyranny. She can speak and be heard. Her country and her people listen, and it’s only extremists who want to silence her.

Hers is such a contrast to the life of another inspiring and famous woman who was not free and who had to keep silent. Anna Akhamatova was the beautiful Russian poet whose husband was shot in the Stalin’s terror, and whose son was in and out of gulags until 1956 for the crime of having the parents that he had. In her long poem ‘Requiem’, which took four years to write between 1935 and 1940, she wrote these lines, having resisted the temptation to flee to the West like so many creative people whose lives were also in danger:

‘No foreign sky protected me,

no stranger’s wing shielded my face.

I stand as witness to the common lot,

survivor of that time, that place.’

Later, when the poem was published in 1961, she wrote: ‘Instead of a Preface’.

‘In the terrible years of the Yeshov terror I spent seventeen months waiting in line outside the prison in Leningrad. One day somebody in the crowd identified me. Standing behind me was a woman, with lips blue from the cold, who had, of course, never heard me called by name before. Now she started out of the torpor common to us all and asked me in a whisper (everyone whispered there):

“Can you describe this?”

Then something like a smile passed fleetingly over what had once been her face.’

Simply because she was a poet, whose writing the Soviet authorities condemned with the usual epithet – bourgeois – Anna’s life was perpetually in danger, and she was banned from most activities. She could have fled, but she stayed to be with her people – their witness – her only weapon, silent passive resistance. Active resistance would simply have meant the anonymity of being one of between forty and fifty million Russians shot, starved or worked to death in the gulag – the common fate of Soviet citizens under Stalin.

Poets met secretly, they wrote their poems in secret, and read them to each other. They each memorised them, and then the dangerous and incriminating pieces of paper were burned. So Anna became a witness. Witnessing was the only thing she could do.

And when Stalin died, and conditions eased, she emerged and she described. Her poetry was published and she became famous, and an inspiration to all who had resisted, and a lesson to those who came after her. Her words meant that no-one could forget.

I’ve often thought about Anna, and how witnessing matters so much to each person who suffers – somehow, to have a witness dignifies and validates the suffering and mitigates the loneliness. And women seem to have always instinctively been witnesses – witnesses at birth and death – witnesses to war, witnesses to life. Watching, validating, and by the very act of being there, loving.

It’s an unsung gift, but when I listen to a friend who works in a hospice, I realise that it’s one of the greatest gifts. Witnessing requires no words. It’s commitment and unspoken love, whether it’s Anna Akhamatova witnessing her country and her people’s agony and being there for it, or the mother, the daughter, the sister, the friend who watches through the night when the great life dramas of birth or death are being played out.

And often it isn’t even as dramatic as that. My daughter was driving a lonely immigrant who had no family, to hospital for a breast cancer operation. As she got out of the car, she saw the woman’s face. My daughter rushed round to her side, and stood, arms around her, just holding her, tears flowing down both faces. Frantic, she called out to the door attendant – “is it alright to park here?”  “Of course,” this beautiful man replied, “it’s for people like you”. They stayed holding each other until the friend felt strong enough to go inside – my daughter with her.

And one image is forever imprinted on my mind. I was sitting on a bus with the rain pouring down, dusk just beginning to darken the overcast skies. Something made me look out. There was a man I had got to know on a series of consciousness- raising courses. I hadn’t seen Brian for a while. He was sitting in the gutter in the rain with his arm around the shoulders of a drunk. Being there. Witnessing.

Trying to keep to my resolution to simplify life, and stop giving useless objects to people who lack for nothing, I’m making a jar of lemon curd for a friend who has a birthday. I’ve collected over time some of the nicely shaped Bon Maman French jam jars with red and white check screw- top lids – perfect.

Juice three lemons, and grate the zest. Put in a saucepan with ¾ cup of sugar, 150g of cubed butter, and six free range or organic beaten eggs. Stir over a medium heat until the butter is melted and the mixture has thickened. Don’t boil, take off the heat before it does. Pour into sterilised heat proof containers, and leave to set. Cover and keep in the fridge, and it will last for a month or so.

To organise work in such a manner that it becomes meaningless, boring, stultifying, or nerve-wracking for the worker would be little short of criminal; it would indicate a greater concern with goods than with people, an evil lack of compassion and a soul-destroying degree of attachment to the most primitive side of this worldly existence.

Equally, to strive for leisure as an alternative to work would be considered a complete misunderstanding of one of the basic truths of human existence, namely that work and leisure are complementary parts of the same living process and cannot be separated  without destroying the joy of work and the bliss of leisure.

E.F. Schumacher 1911 – 1977 – discussing Buddhist economics in ‘Small is Beautiful’. Schumacher was an international economist whose thoughts on economics evolved to cover many aspects of environmental protection, as well as the preservation of the  integrity of small local economies.