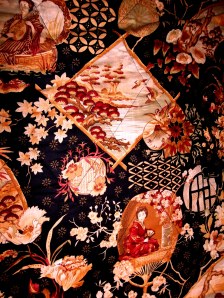 That Christmas, when they were seven and eight, I had sent the children to the other side of the world to see their father and grand-parents. Instead of cancelling their daily treat of chocolate milk, I gave it to the children who lived around the corner with their single mother and cat called Mehitabel.

I lived in a big old white verandahed house next door to a park, and sometimes when I looked out of the window I would see them trailing dispiritedly past in single file, mother in front, and three small scruffy children aged seven downwards, straggling behind her, followed closely by the cat.

One warm summer night, the eldest, my son’s friend, with the unfortunate name of Ezekiel, came rushing into my flat, and said: “Mum says ring for the ambulance!” I did, and a few minutes later he was back, saying: “Mum says cancel the ambulance. The police might come too. She wants you to come. “

As we ran I tried to find out what had happened. His father was a drug addict, who had recently, according to my horrified son, “stomped” his mother in law when he was high. As we hurried towards the house, I worried that I might get stomped too. When I got there, Melanie was waiting. At the door-step I had to step over the cat Mehitabel who’d been speyed that day and was mewling in pain, while at the same time her kittens were clamouring for milk. Not a good start. My heart sank. The smells and the squalor turned my stomach.

Melanie whispered to me in terror that the ex-husband had taken an overdose, and because he was on a methadone recovery programme was furious when he realised she’d ordered an ambulance, as it could get him into trouble with the police and wreck his programme.“He’s just coming to now,” she agonised, “and I don’t know what to do.”Neither did I.

I could hear heavy dragging footsteps moving across the uncarpeted wooden floor overhead. All the family cowered, and I stood in the hall facing the stairway with them behind me, as a tall heavy man lurched round the bend in the wooden stairs. To my astonishment, as though I was at an English garden party, I smiled, stepped towards him, stuck out my hand to shake his, and heard myself say: “How d’you do, we haven’t met, I’m Valerie …”

His blank blue eyes focussed, he took my hand, returned the greetings, and a sigh seemed to emanate from the three small children and his wife holding their breath. We discussed the cats, let a few other polite nothings pass between us, and with everything seeming to be quiet and normal, I left.  And shortly after, he did. In the years that have passed I’ve often thought about this unconscious knee-jerk conditioning which was so banal and mundane that it lowered the temperature immediately. Would I do it differently now that I’m older and more conscious?

Ten years later when I was doing hard labour on a consciousness – raising  course in Australia – with nearly a hundred others – one of the charges laid against me by the course leader was that I was gracious! He said it stopped me being real, and was a defence mechanism that didn’t serve me. I didn’t get it then, and neither did some others who came up to me afterwards, and told me they liked me the way I was. But as time went by, I did get to see what he meant about avoidance and being real, and also to understand at a deep level, the truth of these well-known, lovely lines from Margery Williams’ classic, ‘The Velveteen Rabbit.’

“Real isn’t how you are made,’ said the Skin Horse. ‘It’s a thing that happens to you ….
‘Does it hurt?’ asked the Rabbit.
‘Sometimes,’ said the Skin Horse, for he was always truthful. ‘When you are Real you don’t mind being hurt.’
‘Does it happen all at once, like being wound up,’ he asked, ‘or bit by bit?’

‘It doesn’t happen all at once,’ said the Skin Horse. ‘You become. It takes a long time. That’s why it doesn’t happen often to people who break easily, or have sharp edges, or who have to be carefully kept. Generally, by the time you are Real, most of your hair has been loved off, and your eyes drop out and you get loose in the joints and very shabby. But these things don’t matter at all, because once you are Real you can’t be ugly, except to people who don’t understand.”

Being real to me, is about having the courage to be honest, never hiding who we are, never being ashamed of anything we are, accepting who we are  – and most important of all – being vulnerable. When we’re vulnerable we don’t fear being hurt, but know that great gifts can come out of risking ourselves. And somehow when we are real and therefore honest about our feelings, others can respond at that level of vulnerability and truth.

Being vulnerable is about having an open heart, and being available to both spontaneous joy and un-regretted sorrow. There’s a freedom when we start being real, we dare to be adventurous in spirit, and calm and confident in adversity. We don’t have regrets, because we know that there are no wrong paths. “Paths are made by walking,” as the Spanish poet Antonio Machado wrote.

One of the most real stories I’ve heard is about the Dalai Lama, who has never been anything but authentic, honest, wise, and now – I realise – vulnerable, spontaneous and real! A friend had spent the weekend with him (and a thousand others), studying Tibetan scriptures. The Dalai Lama read them aloud in Tibetan, and then someone else translated them into English, and he discussed them.

At the end of the second day, when they had reached the end of the programme, he held up the book, and said to his hearers something like: if you found this useful or enlightening, then you can read it every day.

“If not,” he twinkled, with his wide wise smile, “Fuck it,” and threw the book over his shoulder! There was a moment of disbelieving silence, and then everyone roared with delighted laughter.

I’ve been battling with the damage the dentist inadvertently did to two good teeth some weeks ago, and am now about to have two root canals, so I’m eating ‘soft’ food. Yesterday I remembered a dish we used to call: ‘convent eggs.’ It’s comfort food – creamy mashed potatoes, and hard- boiled eggs covered with cheese sauce – simple, cheap and easy. When mashing the potatoes I pour cream or milk into the pan with drained potatoes, and as soon as it bubbles I take it off the heat, and mash with lots of butter, salt and pepper. At the end I quickly beat the potatoes with a wooden spoon to make them fluffy. Put the potatoes on a warmed plate, cut the hard -boiled eggs in half and press into the potatoes, then pour the cheese sauce over. That’s the quickest way. But the same layers placed in an ovenproof dish, and grilled until brown adds a dimension of crunch and taste.

81 responses to “The real Dalai Lama”