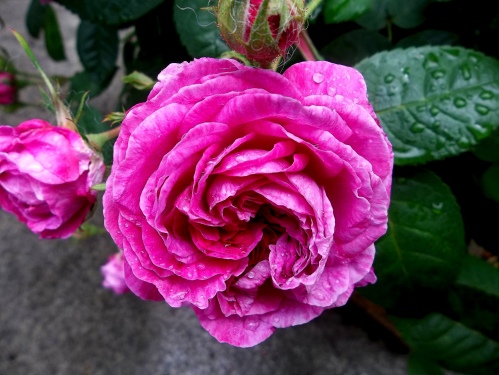 A friend went for a happy break away with distant family, and returned home to find the bliss of silence awaiting her. She shared it with her readers, the deep need for solitude and silence, and how simply being with her plants, communing with her creatures, savouring the long views, the huge skies, and never speaking a word, she felt restored and at ease with herself.

Her readers, a band of like minds, responded that silence and solitude were necessities in their lives too. We discovered that we were not strange, we were not eccentric recluses, but that we were all strangely normal !

I thought about this, and realised that this group of women who had responded had probably reached that point in life when we want to experience our Hestia natures. Hestia was the Greek Goddess of the hearth and in her wonderful book, ‘The Goddesses in Everywoman’, Jean Bolen explores Hestia’s nature, and describes the Hestia archetype as being centred on home and family. She suggests that if Hestia wrote a book about her inner process she would call it Zen and the Art of Housekeeping.

Attention to the household, which includes the plants and animals in our care, is almost a spiritual process for a Hestia person. Women with this archetype find a sense of inner harmony as they cherish their surroundings and they know that this  nurturing of their corner of the planet, is a form of mindfulness. Jean Bolen called this time in which the Hestia archetype is totally absorbed in her  activities: ‘kairos’ time, a lovely Greek word describing that sense of being outside time, and feeling completely fulfilled. It’s also time-Less, we emerge from the ‘Zone’ as some call it, to find that time has flown while we were unconscious of the very word.

It feels like a creative activity, which it is, when we are so immersed in our tasks that time is meaningless. This is psychologically  nourishing, and we feel deeply satisfied and energised, powerful and peaceful when we come out of the ‘Zone’; like a writer feels  on completing a piece, a poet when her poem has emerged, or an artist after an inspired day at the easel.

Hestia women need and seek solitude, and as children they often felt out of kilter with their families, finding refuge in books and withdrawing emotionally. As adults, they need ‘A Room of Their Own’. The late Ardis Whitman, free-lance writer quoted  in ‘The Feminine Face of God’, said that: “…when we are surrounded by people, some of the passion and insight natural to us leaks away through the sieve of small talk. At your most daring moments you believe that what is going on is the ultimate human work – the shaping of a soul. The power of life comes from within: go there. Pray, meditate. Reach for those luminous places in yourself”

The obstacle to taking this time for self is women’s guilt. Too often they feel guilty at making time for themselves, fear they are being selfish, and so give away their vital self-nourishment by trying to please others. With maturity and the confidence of age, they can reclaim the time and space they need, knowing the truth of Rabbi Hillel’s ancient imperative: ‘ If not me –who? If not now – when?’

I have a friend whose stepmother is part Native- American. She was brought up by her Native -American grand-parents, and she told me:  “there was no idle chatter in our house. It was silent. My grandparents believed silence was sacred and should not be broken unless we had something of worth to say” …  Whenever I feel the need for silence at home, I say to my husband (politically incorrectly – sorry chaps!):  Red Indians! He gets the message.

Living in an intimate relationship with one person is so demanding when they no longer go to the office every day, in order to regain the silence and solitude that I need, we have a silent Tuesday, when no words are spoken. The house fills with something more than silence, a full, flowery, beautiful essence, which is only present in that magic space. Sometimes we have a Tuesday on a Thursday or a Sunday… whenever we feel we need it.

It isn’t just women who need solitude… I suspect there are many men too, who need the refreshment of peace and quiet… Thoreau famously wrote that he found it “wholesome to be alone the greater part of the time… I love to be alone”, while one of the early Desert Fathers, Abbas Isias said : ‘Love to be silent rather than to speak. For silence heaps up treasure, while speaking always scatters.’

We’re not talking of the harsh, ascetic, masculine discipline of a Trappist silence, but  respite from continual communication. This respite is more like immersing the self in a deep well of nourishment, from which we emerge refreshed and invigorated. In his book ‘A Time to Keep Silence’, famous travel writer Patrick Leigh Fermor described his stay at a Benedictine monastery in France. The Benedictine order with its gracious silences and routines was a revelation to him, and he went through three stages – depression and despair for a few days, then days of deep exhausted sleep, from which he emerged feeling purified, energised, joyful and peaceful.  When he remarked one day to the Abbott what a blessed relief it was to refrain from talking all day long, the Abbott replied, ‘Yes, in the outside world, speech is gravely abused.”  And even sixty years ago, C.S. Lewis said: “We live… in a world starved for solitude, silence, and privacy.”

I haven’t mentioned the word introverted, as I feel that Jung has no place in this discussion since he felt that spirituality was a masculine quality. Yet the thoughtful, mindful qualities that both men and women develop when they seek silence, which he would define as introversion, does lead to a greater awareness of the spiritual side of life. This inward turning of focus is a path that both men and women are taking more and more in these turbulent times, and if anything women are more likely to take it than men.

I’ve always loved Hestia, the home-loving, feminine personality who is her own woman. Not all women have this side to their personality, but when we deeply focus on our inner life, or give ourselves time to calmly enjoy our household chores – sorting a cupboard or baking a loaf, we are getting in touch with that aspect of ourselves. We all have other archetypes in our natures, from Aphrodite to Athene, Demeter to Hera, the goddesses of love and careers, motherhood and marriage, but as we grow older and wiser it seems that Hestia is more present in our consciousness.

When I was a child we used to buy Vesta matches in red and yellow oblong boxes. I didn’t know then that Vesta was the Roman name for Hestia, the goddess of the hearth, believed to be present in the living flame. Her sacred fire was supposed to provide light, warmth, and heat for food, and her presence to inspire peace,  meaning, and sanctuary for family. These things seem very precious in our tempestuous times…  they are what can sustain us, and make our homes a serene and happy refuge – and not just for ourselves – but for those we love.

Celi’s post ‘The lack of chatter in the box’ at her beautiful blog  http://www.thekitchensgarden.com    inspired this post.

The French call them ‘bonne-bouche’, and I needed a little something to start an impromptu supper with friends. To make it fun, I collected together the big pink and maroon shells I’d collected from the beach, lined them with slices of cucumber, arranged on the cucumber four fat prawns lightly sauted in garlicky butter, and dabbed freshly made aoli over them. Sprinkled with finely chopped parsley, they were a hit, eaten with fingers, but served with a paper napkin that matched the rest of the table.

To everything there is a season and a time to every purpose under heaven… a time to keep silence and a time to speak. Ecclesiastes: chapter 3, verses 1 and 7

73 responses to “Talking about silence”