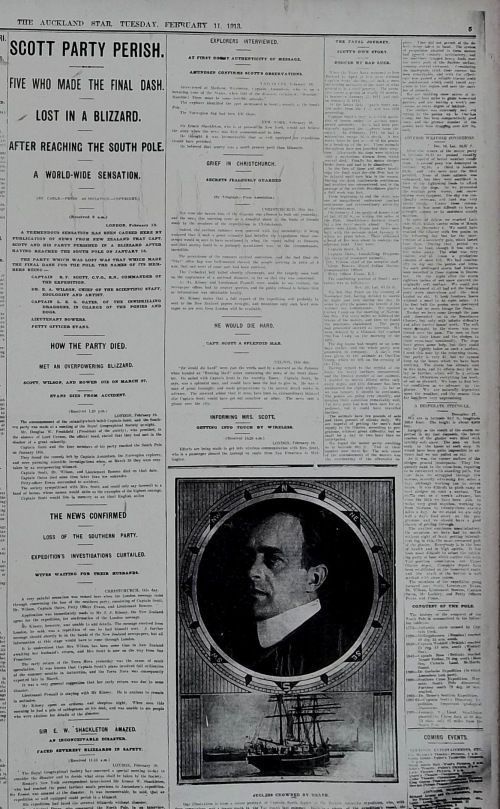 I’ve been in a situation for the last few weeks where I haven’t seen or read a newspaper, watched TV or listened to the radio.  The only newspaper I’ve seen is the hundred year old front page of The Auckland Star, a now defunct newspaper, and this page was a facsimile, framed, and hanging in odd places in our various homes over the years.

It was dated 11 February 1913. Two thirds of the page was filled with the main story which had shocked the Empire (there was only one empire back then, and it was British!). The rest of the space was taken up with smaller items, an African revolt in Mozambique, quelled by the Portuguese, the terrible fighting between Serbs and Turks with high casualties, another item in which the Turkish commander of Adrianople on hearing of the proposed neutralisation of the fortress promised ” to take care to put the 40,000 Bulgarians who live here out of the way. I shall confide the women and children to the foreign consuls, turn the guns on all the Bulgarians and then convert Adrianople to a giant rubbish heap”.

Beneath this was a story about the Turkish Red Cross addressing European sovereigns asking them to recall the law of Christ to stop Christian forces committing the most ghastly outrages and assassinations on Turks witnessed in Europe in modern times. Under this item was the English response to the Australian Cricket Association’s investigation into the behaviour of the team in England, followed by a report from Melbourne on the arrest of two Chinese involved in an enterprise with Hong Kong Chinese to smuggle ‘Chinese persons’ into the Commonwealth.

A political crisis in Japan had provoked rioting which was put down by the army, and the English House of Lords debated compulsory physical training and elementary military skills to: “lay a foundation … on which a scheme of national defence could be based if unforeseen dangers menaced the country”. At the bottom of the page, an unforeseen menace, the Kaiser, was reported as having unexpectedly addressed the university centenary celebration, and “delivered a fiery panegyric upon German military virtues”.

And Suffragettes had a smashing time in London, where they broke the windows of the Reform, Carlton, Junior Carlton, Oxford and Cambridge Clubs, and Prince Christian’s house ( what had he done?). “The missiles were of “lead and fireclay balls”.

The only other news of women was the report of the Kaiser’s daughter’s betrothal to Prince Ernst of Cumberland. Nothing very different there. Serbs killing, refugees being driven from their homes and ‘confided to the care of foreign consuls’, cricketing misdemeanours, African riots, Japanese politics, boat people trying to get into Australia, suffragettes protesting, reports on princelings, are still the stuff of the news today. Substitute Syrians for Serbs, feminists for suffragettes, and it could just as easily be the front page of any newspaper today.

What made this day in history different was the story which filled the rest of the page and which has grabbed the imagination of the world ever since – the story of a man who failed. First, he failed to achieve his objective, and then he failed to get back safely.

And this story is the only clue to how things really have changed in the last hundred years, even though they may seem to look much the same.  Scott and his men would not have died now – they would have had the latest dietary discoveries to sustain them, they could have gone on tractors or skis, or any of several different ways, and kept in touch with the media and their families with all the different forms of communication we now have at our disposal … they might even have been able to keep us up to date on Facebook, and Twittered their families regularly.

The marvels of modern communication are what really are changing the world … so that maybe – just maybe – that page of news items may seem very dated in another hundred years.  But the other thing which has changed since that day in 1913 is what we’ve done to our planet in the last hundred years, destruction on a scale that actually threatens the survival of the human race, and prompts some to wonder if it has a future.

Maybe the biggest change since that day of news in 1913 is the change in our mind-set… we have a United Nations now, which is supposed to help bring peace to troubled hot-spots… at least the intention is there. We have governments who talk about the happiness levels of their people, and maybe best of all, we have the internet to unite us to change things.

We all know that riots, revolutions and parties can be created with a few text messages, but there’s something deeper and more important happening in the world that we bloggers inhabit. That is the growth of groups and individuals who use this medium to change things for the better.

The biggest and most successful so far is the group known as Avaaz, which now has millions of members world-wide who create and follow up petitions to governments to rescue women about to be stoned for having been raped, petitions to stop destruction of ancient tribal lands and forests, to tackle Monsanto and their environmental damage, to lobby European countries to stop using pesticides to save our bees.

Their range of concerns cover all the issues of our small world and the more of us who can support them the more likely we are to change this precious world for the better. So far they’ve achieved their aims on many issues both great and small, and saved a few women. And yes – that’s a commercial … and Avaaz is the name!

At last we have some rain, and the autumn mist now hanging over us makes me hope that perhaps we will get some mushrooms springing up in the grass outside our house… some years we do, some we don’t, and I never know why. If we do, and we only have a few, they will go with bacon for my husband. But if we have plenty I’ll cook them in butter with some chopped garlic, add chopped parsley and then some thick cream to bubble up. Poured over toasted sour dough bread, they are tasty and delicious.

When we do dote upon the perfections and beauties of some one creature, we do not love that too much, but all other things too little. Never was anything in this world loved too much, but many things have been loved in a false way; and all in too short a measure.