The magic and mystery of cats 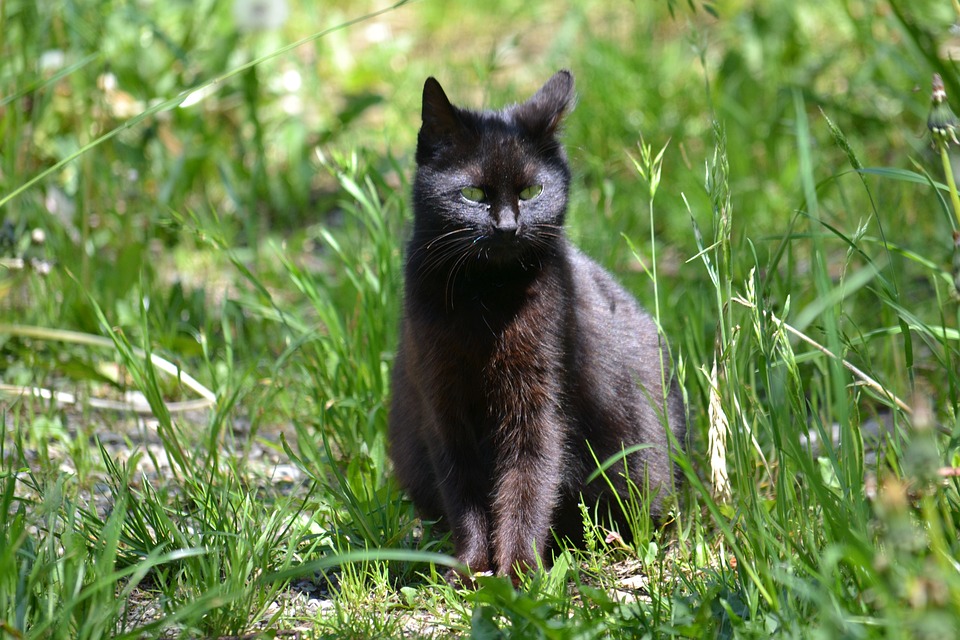 “I have lived with several Zen masters”, wrote master and mystic Eckhart Tolle, and went on to say they were all cats. Well, I have lived with one zen master, a small black witchy cat who entered my life with purpose. Black cats are notoriously hard to adopt from rescue centres because so many people associate them with the myths of witches, having absorbed the ancient male propaganda about women and healers (but that’s another story).

I’ve always thought I was a dog person, having nurtured seventeen rescued dogs (three at a time, but that’s also another story), yet when I look back on my chequered past, I see there are just as many cats as dogs who have entered my life – some  at a distance.

All those cats who did, had those mysterious feline qualities of dignity and free spiritedness. Two strays were the first, Black Kitty and Wild Kitty – a beautifully marked tabby – both unnamed, a subtle way of not alarming my parents into thinking I wanted to keep them, and also I couldn’t bear to give them names and then have to relinquish them. But after a few weeks my parents softened, and expertly using the thin end of the wedge, I managed a balancing act between the kittens and the puppy I had also acquired over my parents’ dead bodies.

I was eighteen and I wonder now how I could never have looked into the future and realised that I wouldn’t be around to care for these fragile little creatures. We moved house a couple of months after acquiring them, and I was immensely relieved  to find that my parents were including my animals among items to come with us.  The journey in the back seat of the car with an excitable puppy, two terrified kittens on the loose with long claws, and my loudly protesting eight-year-old brother was an ordeal never to be repeated.

At the new house, Black Kitty was run over, but Wild Kitty established a comfortable possie behind the warm boiler in the kitchen. I left to join the army a few months later.  When I returned months later for a weekend leave, the parents had moved to another house the other side of the town, and Wild Kitty was missing – apparently she had left home when I did. The family moved back to an army quarter a year later, half a mile away from the house I’d left, and miraculously Wild Kitty turned up when I came home for the weekend.

From then on Wild Kitty appeared when I came home on leave and then pushed off when I left. The last time she was seen was when she walked across the grass to show us her line of tiny kittens straggling behind her.

Decades later in this country, I received the usual Christmas presents from irresponsible townies who dumped two tiny tortoiseshell kittens at our gate. Tins of cat-food for a year until they were caught.  Another pair again another year, and then a cat and her kitten when we moved to a new house, a gentle stray in Norfolk Island who nestled on our bed, and waited for us every day while we were on holiday, more tins of cat food, followed by starving kittens in Fiji outside a restaurant…only scraps for them…

Some years later, back in town to be near new grand- children, we lived in a house on the side of Mt Eden, an extinct volcano. Our garden stretched steeply up the slope and ended in overgrown shrubs and trees and wilderness. One day I noticed a stray cat in the garden. Feeling sorry for it, I put out some food the next day. In a few days there were five cats, so carefully keeping the doors shut so no cat-chasing King Charles spaniels could do their worst, I put another dish or two out.

By the end of three weeks I had fifteen stray/ wild/dumped cats waiting neatly and patiently on the steps leading up the hillside. I put out five bowls night and morning, and they shared with perfect good manners, and then quietly left with dignity. They always knew the time I would put the food out, and would be lined up expectantly and hungrily for about twenty minutes before, and there was never any squabbling or pushing in when the food arrived .

When we downsized to a little town house, and I had to leave them, I used a possum trap to catch them one by one, and take them to the vet, as I couldn’t bear to think of them starving on the hillside. I caught them all except three tom cats who were too clever to get themselves trapped.

Then, not enjoying living in town, we moved back to the country. We’d only been there a week when we went out into the garden, and there on a log in the sun was a tiny black cat. She got up, stretched, and came over and nuzzled us endlessly, followed us inside the house, and all but said: ‘I’ve been waiting for you’.

She refused to go back home, which was on the next-door acre of land. For weeks I resisted, refraining from feeding her, and yet every time I opened the door, there she was on the front door mat. Eventually I put a deep linen basket with a soft cushion in the bottom for her by the front door, and finally, when I heard a fight  in the middle of the night, with the big marmalade tom cat who had come- it seemed- to fetch her back home, I opened the door to her. She ran straight in and settled down on the bed, and for the next ten years ran my life. She was a small oasis of calm and character, whose endless antics amused and entertained; while her wilfulness and intelligent curiosity and mysterious inner life fascinated me.

Whenever her previous owner saw us out walking the dogs with Cara, the cat, skipping along with us, he’d wind down his car window and shout “traitor! “at her. The end of Cara’s story is in the first blog I ever wrote, called ‘Goodbye Cat.’

My last encounter with a cat was more like sitting in that boat with a tiger in ‘The Life of Pi.’ A panther-like black cat had terrorised both cats and owners in our small village for many years, and my friend who had a small gentle cat who was being monstered, decided something had to be done to save her cat. I arrived at my friend’s house just as her Altzheimers husband was putting a blanket over the possum trap and cat, which they had arranged according to my instructions!!!

Feeling responsible, I volunteered to drive friend and captured cat to the vet. We carefully put the trap on the back seat, which was covered in a rug to protect the seat. Chatting happily, I suddenly felt sharp claws dig viciously into my back and shoulders, and a black body hurtled past my ear to land on the dash board. A panting black creature with blood literally dripping from its fangs from where it had forced the door of the cage up, using the crack from the seat rug to lever it, and with fierce yellow eyes glaring at me, crouched there – ready to spring.

It did, back into the back seat, shaving my ear the other side as it hurtled past. Driving was impossible … I pulled unsteadily into a farm drive, not having the faintest idea what to do, and my friend, who was bulky enough for the angry desperate creature not to tackle her side of the car, cringed in horror. The cat continued to leap back and forward past my ears in a frenzy, raking my shoulders and back with its claws each time. Luckily a car was coming down the drive… I flashed the hazard lights, tooted and did everything to show I needed help.

We dared not lower the windows to talk in case the frantic, mangy, bleeding animal escaped to terrorise a fresh territory. The farmer shouted through the glass, telling us to go to the vet – impossible – which he soon realised as the cat continued to launch itself to and fro past my head. The end of the dreadful story came when we quickly eased ourselves out of the car doors, and while we cowered in a farm shed, the helpful farmer opened the car, and shot the poor creature as it made a dash for freedom.

I took my expensive blood-stained cream cardigan straight to the dry cleaners, and had a stiff cup of coffee- I really needed a stiff glass of something stronger. Back home, I washed the blood off all the windows and the dashboard and rubbed antiseptic cream into all my weals and wounds. The next morning, I went out to go shopping, and found to my dismay that there was still blood everywhere. As I washed them off, I counted twenty-eight blood-stains on the inside roof of the car alone. Alas, the blood never came off my cardigan.

Cats – here? No, no danger of strays or bullies here. We live in a covenanted forest with an agreement that we have neither cats nor dogs in order to preserve the native birds, most of whom don’t fly. So no more temptation, no more catching or herding cats, or even black panthers. Sadly, all these encounters with cats have mostly been the result of man’s inhumanity, or irresponsibility.

Unlike the dogs we rescued, I was usually unable to do anything to better their lot, and also unlike the wonderful people all over our city who visit colonies of strays every night to feed them. Sometimes these cat-lovers manage to catch them and get them de-sexed or healed of their illnesses, but I still feel sad that they don’t have homes, which once-domesticated animals long for.

Robert Heinlein, science fiction writer who some feel was also a seer, once wrote that: “How we behave toward cats here below determines our status in heaven.” He may well be right – if there is a heaven – so maybe I’ll see you there! And maybe those dignified, elegant creatures we have encountered in this life will be there too in all their mysterious beauty to love us still, in their own idiosyncratic way.

I had some chicken nibbles in the fridge bought to use for a chicken risotto, but when it came to it, boiling them up for stock etc didn’t appeal, so instead I marinaded them in half a cup of honey, nearly the same of soy sauce, a good glug of sesame oil, lemon juice from a juicy lemon, a generous teaspoonful of minced ginger and the same of garlic. After a couple of hours resting in this mixture, thirty-five minutes in a hot oven, and eaten with sour dough bread, they made a quick tasty lunch.
Food for thought

I don’t believe there was ever anybody who loved being happy as much as I did. What I mean is that I was so acutely conscious of being happy, so appreciative of it; that I wasn’t ever bored, and was always and continuously grateful for the whole delicious loveliness of the world.”

Elizabeth von Arnim. Author of Elizabeth and her German Garden

19 responses to “The magic and mystery of cats”