My drug of choice 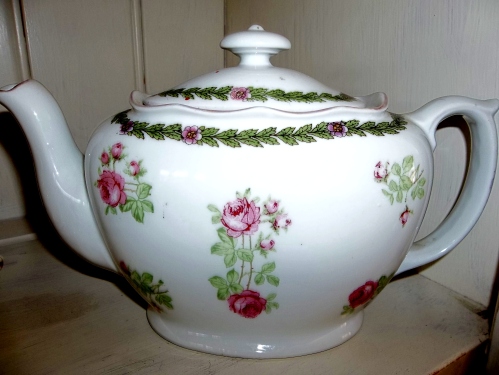 “I thought I’d make a cup of tea”, were the last murmured words of the mother of Janet Frame, NZ writer, as she died in her husband’s arms in the kitchen. They could well be mine… tea for me marks waking up and going to bed, a break mid-morning and that indispensable cup in the afternoon, the cup that cheers when a friend calls, or the one that sustains after a shock or a long day’s retail therapy.

I felt the would-be murderess Mrs McWilliams who shot her enemy Mrs Dick in the Tudor Tea Rooms in Christchurch NZ was a kindred spirit. When she was disarmed after her pot- shot she retorted: “Oh, give me a cup of tea, that’s what I came here for.”
When told that her victim was not dead or even much hurt the redoubtable Mrs McWilliams replied, “Oh isn’t she, what a pity.” (She got seven years jail for her failed attempt to eliminate her enemy)

We can sheet back this country’s addiction to tea to our discoverer Captain Cook, who concocted the first brews from leaves of the manuka tree, which he called, and many still do, the tea tree. He experimented with it in 1769, brewing the leaves in the hope of preventing scurvy, and wrote in his journal ( men write journals – women are downgraded to writing diaries): “The leaves were used by many of us as tea which has a very agreeable bitter scent and flavour when they are recent…. when the infusion was made strong it proved emetic to some in the same manner as green tea.”

In some ways, tea was the answer to coffee… men had gathered to gossip in coffee houses in London and elsewhere, for several centuries, while women had nowhere acceptable to congregate. The first tea-rooms opened in Glasgow in the 1870’s and tea-rooms quickly became as important to women as coffee houses to men in previous centuries.

Afternoon tea at home also became an institution… it was a relaxed time when women took off their corsets before changing into finery for dinner, and wore soft floating tea gowns. The great French food philosopher Brillat-Savarin called afternoon tea: “an extraordinary meal … in that, being offered to persons that have already dined well, it supposes neither appetite nor thirst, and has no object but distraction, no basis but delicate enjoyment…”

I’ll say – and not just for tea but for chocolate cake and shortbread, meringues and cucumber sandwiches. I used to think tea was an occasion just for ladies to enjoy… I couldn’t imagine inviting a man to tea… but then I remembered the delicate courtships conducted over silver tea- pots by the fireside in Edwardian times, and realised what pleasures we have forfeited in our nine to five world. I also wondered if this was the raison d’etre for those loose floating tea gowns… easier for making love?

Portly philanderer, Edward the Seventh used to visit his lady loves for afternoon tea, arriving in an elegant black carriage with his coat of arms on the door. Inside, his inamoratas awaited him. They could be the ravishing Lily Langtry, the Jersey Lily, as famous for her beauty which adorned postcards, as Kim Kardashian is today; or others, like Winston Churchill’s gorgeous mother Jennie, or even Camilla Parker Bowles’, (aka Prince Charles’ second wife) great-grandmother, Mrs Alice Keppel. She was Edward’s mistress for twelve years and was invited to his death-bed by his generous wife, Queen Alexandra.

Afternoon tea for me has never been graced by the presence of king, prince, or even lover… my most un-forgettable afternoon tea was at a Catholic convent in Ipoh, Malaya. The Chinese nuns in this little convent had been accredited to examine children taking GCE, the Cambridge University secondary schools exam, in oral French. So accordingly, I and nine classmates, embarked on the day- long journey in stifling armoured vehicles (to protect us from lurking Chinese bandits) and then by train, from the Cameron Highlands down to Ipoh.

Arriving in the early evening after travelling all day, we went to sleep in a dormitory with other Chinese teenagers who all, to our amazement, managed to get undressed and shower without showing an inch of flesh. This proved quite a challenge to us less inhibited girls trying to do in Rome as the Romans did. The next day we hung around until afternoon in the steamy convent grounds, and then I was first in alphabetical order for the exam.

I was shown into a little room, where a bowing, smiling, gentle little Chinese nun in heavy black horn-rimmed spectacles and starched veil awaited me. It would have been bad enough trying to understand a Chinese person’s French, spoken by someone who had never been to France or met a French person, but worse was to come. She made a cup of tea and offered me a cake, baked especially for us all, she explained in broken English.

So there we were, an Asian nun, performing, not the tea ceremony of her culture, but an adulterated version of a western ritual, and speaking a foreign language to a person who couldn’t make out a word she was saying, and who knew that shortly an even greater ordeal awaited, in which two people who already couldn’t understand each other, were about to embark on a conversation in a language foreign to them both.

But it was the preliminary that almost silenced me. I bit into the cake, and discovered with horror that the nuns knew no more about baking English cakes than they did about speaking French. They had obviously used sawdust held together, not with butter and eggs, but with some sort of inedible glue. With the first bite drying out my mouth and clogging my throat, I realised that now I had to struggle through the whole of this un-eatable culinary disaster, as well as bluff my way through the exam. Each bite nearly choked me, and I still had to look as though it was delicious.

Somehow I got to end of this terrible experience, and there seemed to be an unspoken agreement that if I ate the cake, she would find my school girl French understandable and acceptable to her Chinese ears. I left with us both bowing and smiling, with great good humour, and walked into my classmate waiting to go in. She raised her eye-brows questioningly, and I smiled maliciously, which she optimistically took for re-assurance… later our profane school- girlish post mortems and accusations would have curled the ears of these innocent kindly nuns.

Other teas, with silver teapots, even a white-capped maid, tiers of scrumptious cakes, and lace napkins have never blotted out the memory of this ordeal. And now, a law unto myself, I break all the rules of the English ritual afternoon tea, which is a very different thing to tea ceremonies in parts of the world where tea drinking originated. My most daring break with convention is to put the milk in first, considered so vulgar by generations of tea drinking aficionados.

And having discovered that tea tastes much nicer when the milk goes in first, I have now also discovered that science supports my taste buds. According to research carried out by the Royal Society of Chemistry in 2003,”… if milk is poured into hot tea, individual drops separate from the bulk of the milk and come into contact with the high temperatures of the tea for enough time for significant denaturation or degradation of the milk to occur.” There you go, as they say in this country…

I have n’t space to touch on one of the most thrilling aspects of drinking tea, which used to be illegal in this country, and provoked fiery debate by male Members of Parliament; and now since 1981, it’s become illegal again ( MEN !!!). I refer to the innocent pastime of reading the tea leaves… but that is too vast and esoteric a subject for this little blog to tackle!

Cucumber sandwiches are de rigueur for the ritual English afternoon tea, and very dull they can be too. These I served for a friend’s birthday party, and we gobbled them up… with relish….
Apart from white bread sliced as thinly as possible – even supermarket sliced does the job… you need peeled and thinly sliced cucumber, eight ounces of softened cream cheese, quarter of a cup of mayonnaise, a good sprinkling of onion powder, garlic powder and a pinch of lemon pepper if you have it.
Mix everything except the bread and cucumber, spread the mix on the bread, and arrange the cucumber on top. Cover with another slice of bread also spread with the mixture. Press down firmly, and cut into dainty bite-sized sandwiches. Irresistible.

By experts in poverty I do not mean sociologists, but poor men.
GK Chesterton