The magic of a letter 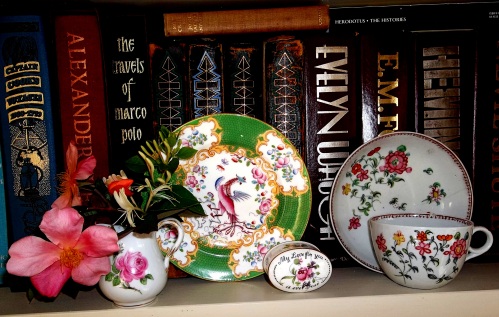 You cannot tie up an e-mail in blue ribbon and place it tenderly in a casket containing others like it, to leave for a grateful posterity to find and marvel over its touching sentiments, and even write a blog about their great-grannie and the beautiful or scandalous love letters she received!

I miss letters which aren’t bills and rates demands. There was so much more to decipher in a real letter than just words. First of all there was the paper it was written on. Cheap, thin, lined paper or coloured paper was a no-no, and spoke volumes about the taste of the unfortunate writer. Discriminating letter writers used a thick writing paper like Basildon Bond in white or pale blue. Even fussier ones tried to afford thicker, expensive, crisp, cream deckle- edged paper, bought from specialist stationers. Yes, there were shops in those days that sold nothing but high quality stationery, often beautifully boxed, and of course, fountain pens.

Fountain pens had the same competitive edge then, that an Apple or an I-Pad has now (or am I out-of date?)… sporting a gold nib, a gold hook to clip it into your suit pocket if you were a man, and a gold clip to pull back for the ink to be sucked up into the pen. You had to remember to empty it if you were flying, or the pressure caused the ink to flood out and stain the suit. I particularly loved the mottled versions, a bit like the marbled end papers on old books.

The ink had to be black or blue…green was vulgar, red was for money matters! The hand –writing was usually based back then on a form of copper-plate. From the age of six onwards, we used horrible crossed nibs from over-use, and dip pens to copy rows and rows of letters in long-hand. It was actually good hand- to- eye co-ordination in retrospect, and there was all sorts of etiquette round that too.

A capable girl named the ink monitor (never me) filled the inkwells and handed them out. The pens were shared out, and our copy books sorted. Woe be-tied the careless child (usually a tiresome boy!) who spilled his inkwell over the desk. And unless you learned to hold the pen correctly, it was impossible to actually form the letters – so you had to learn – unlike the way children hold pencils nowadays, in all sorts of strange postures.

There was a lot of un-official lore around hand-writing. We gathered that a hand that sloped backwards, showed the person was deceitful – oh dear – that when the dots to ‘I’s’ were flung wildly far from the ‘I,’ that showed the person was wildly imaginative. My dots remained firmly in place over the ‘I’s’ in my tightly controlled handwriting, which disguised the anxious persona underneath my vivacity.

I read that if a person used the word ‘ I’ more than every seven words in a sentence, this showed how egotistical they were… I wonder if that’s why it was so popular to say, “one thinks”, instead “I think.” I even had a friend who referred to herself in the third person.

Graphology, the art of reading character from hand-writing, turns out to be rather accurate in the hands of a skilled practitioner. When my brother worked for a London recruitment agency, a potential employer asked for a graphologist’s report on a possible employee.  Sceptical, my brother had his hand-writing analysed first, and was amazed when the report came back even detailing the problems he had had at birth!

But even an unskilled interpreter could enjoy the impressions that hand-writing displayed… scrawling, well-formed, exuberant – to un-readable – lots of that! Old people’s handwriting often became indecipherable, and what was always called ‘crabbed’, which seemed to mean it looked a bit spidery and wavery, thanks to arthritis.

Then there was the envelope – which had to match the writing paper, and here we come to one of writer Nancy Mitford’s famous jokes, or teases as she called them! She decreed that non-U (Non-Upper class) people called it ‘notepaper’, while the others opted for ‘writing paper’. Envelopes which displayed their owner’s regimental crest on the back were particularly prized when we were young – a symbol of the boy-friend’s status. But the fat envelopes stuffed with a thick wodge of pages of scrawl, sharing, gossip, and fun written by girl-friends were even better. They came through the letter-box, until I came to NZ, where we have boxes by the gate and I used to enjoy a stroll out to the letter-box to find these treasures.

Inside, the greeting obviously varied from dear, dearest and darling, to the more formal,’ dear sir or madam’, while the endings – here etiquette ruled with an iron hand. ‘Yours faithfully,’ and a full signature if a business letter… I think ‘yours truly’ was next in line, before getting to ‘yours sincerely’, which could be signed with full name or just Christian name depending on the level of intimacy.

No-one ever signs off: ‘I am, sir, your obedient servant’, these days or: ‘yours respectfully’, or even: ‘yours affectionately’, which rather appeals to me. And how I loved in those old romances the signing off by rejected suitors: “I beg of you to believe that now and always I am your very obedient servant to command” …those were indeed the days. Such chivalry seems dead when most of our e-mail communications seem to end either with Kind Regards – or Regards – so formal, so cold, so colourless.

Some of my favourite books are collections of letters. Will there ever be such collections again? Who keeps e-mails? Maybe some print them off or transfer them into a Keep File. But too often, it’s too easy just to hit ‘delete’ when the in-box gets too full. The one good thing about e-mails is that they’re easy to write so maybe we are in touch more often.

I had one friend whose hand-written letters were delightful puzzles. She was dyslexic and there were great and crucial gaps on every page where she’d left a space in order to go and check the spelling in the dictionary, and had then forgotten and sealed it and sent it. Dear Jackie would have loved the spell-checker… maybe she’s found a heavenly spell-checker in the land of her fathers, where she now rests in peace!

Home after another day gadding about with friends, and feeling guilty about leaving my husband with a scratch lunch, and I hadn’t planned a decent supper either. In the freezer I found some cooked pork sausages which he loves, and thought I’d better dress them up to make a decent meal. Lots of leeks gave me inspiration, and I adapted a recipe of Elizabeth Luard’s.

I sauted several large chopped leeks in butter till almost soft. I added some stock, and let it boil to finish cooking the leeks. At this stage I put the sausages into the leek mixture, then added a teasp of Dijon mustard, and a good sprinkling of nutmeg, salt and black pepper, plus plenty of cream to bubble up and thicken. Delicious, eaten with new potatoes, and green vegetables.  I was having a little cold salmon, so I used some of the leeks as a sauce with it, and that worked well too.

There is no greater sin than desire, no greater curse than discontent,
No greater misfortune than wanting something for oneself.
Therefore he who knows that enough is enough will always
have enough.