Ancient Rituals and a Modern Valkyrie 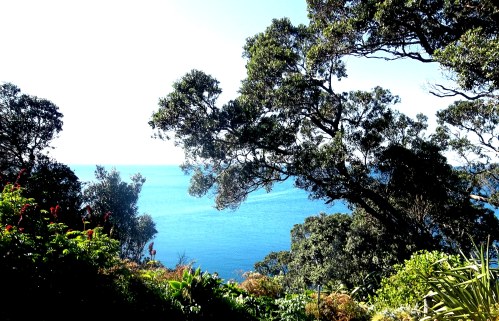 As I write I can hear soft rain falling, punctuated by the larger sounds of drips from overloaded leaves, and the swishing of the sea on the rocks below. The pink-breasted doves are cooing contentedly, bringing a sense of peace– all eleven of them,  who now enjoy two free meals a day. It feels as though the village is in rest and recovery.

A few days ago a man died just beyond our village boundaries. He was the Maori chief and landowner for this area, and had great mana. He was a noble, handsome man respected by everyone, and had a striking, beautiful Pakeha (European) wife, whose dignity and courage matched his. Their marriage was a triumph; she accepted and lived by the local Maori customs, as well as keeping her own integrity, and creating a life of art and culture, warmth, and hospitality. She introduced visitors to the long, empty, pale gold beaches on their land, edged by the rolling blue Pacific; and she kept a herd of nearly a hundred horses, for tourists and locals to ride. She worked hard the way only those whose lives are committed to the wellbeing of horses will know.

The chief was buried at the Maori marae, which lies across the harbour from where we live. The marae is the spiritual centre of Maori life, and the tangihanga – the funeral – is the most important ceremonial that takes place there, taking precedence over every other activity. The body lies on the marae for at least two days before the day of the funeral, and is rarely left alone. Friends, family and members of the tribe come from near and far, dressed in black, and the women often wearing green leaves in mourning wreathes around their heads. They look wonderful. They will talk and sing to the person lying there, recalling both good and bad things about them, laughing, joking – all expressions of grief are encouraged and accepted.

The person who has passéd is commanded to return to the ancestral homelands, Hawaiki,  by way of ‘the spirit’s journey’ –  te rerenga wairua . Close kin do not speak. On the last night, the ‘night of ending’, the pō whakamutunga, the mourners hold a vigil and the coffin is closed. Then either at night or dawn on the third day, the funeral service is conducted, and when the burial rites are complete, a hakati – feast – is served. Everyone who attends brings their share, or gifts called koha.

And when it’s over, the home of the dead one is ritually cleansed with songs, chants and prayers called a karakia and desanctified with food and drink, in a ceremony called takahi whare – ‘trampling the house’. That night, the pō whakangahau  – ‘night of entertainment’ – is a night of relaxation and rest. And after these powerful and therapeutic rituals  the widow or widower is not left alone for several nights following.

So when our chiefly neighbour died, mourners travelled from all over the country, including the famous and powerful, to participate in the tangi. The ceremonies on the last day took from ten in the morning to four in the afternoon. At the same time, another villager died. He too was a distinguished man, a Pakeha, but he had no children and no family. He wanted no ceremony or funeral. ‘So we can’t say goodbye,’ sorrowed an old, old friend…

While this has been going on, I’ve joined for the first time, the annual village winter ritual of having the flu, and as the second week dragged on found myself irritated that I couldn’t even have flu to myself, but had to start nursing my husband as well. Late last night after a second bad fall, I couldn’t move him, so called out the Volunteer Fire Brigade, the local version of guardian angels. It took three of them to get him off the floor, and I then began a chase after the ambulance to hospital an hour’s drive away. Leaving him to be diagnosed and pumped full of drugs, I drove home to bed at three thirty in the morning.

As I made the most of this drama to the statuesque and very beautiful young woman who comes to clean, I asked how her week had gone. Not as exciting as yours, she disclaimed modestly, before regaling me with the story of her horses. She has two. This particular night she had joined friends at a farewell fancy dress party, and worn, she told me, a glittering sequinned body stocking for the first time in her life, accessorised with a net skirt covered in sequins. As the party raged, she received a text saying her horses were loose, and had last been seen galloping in the sea at a nearby village.

After several nerve-racking hours, with reports of them all over the place, she finally ran them to earth in another bay. Abandoning her car, she rode bare – back on one, leading the other by a halter, body stocking glowing in the moonlight, sequins glinting, and net skirt billowing in the wind. ‘I was just glad no police ever clapped eyes on me,’ she said, ‘they’d have thought I was high on something!’

I wish I’d seen her, a magnificent, glowing Valkyrie beneath the shifting clouds and silver moon. As we laughed there was a knock on the door, and there was one of the firemen from last night come to see how I was, one of many others , family, friends, neighbours who’d rung or enquired how we all were.

Life and death, laughter and rain… the village is breathing, the rhythm of the sea encircles us, the in-breath and the out-breath of the universe continues, the heart-beat of life and death still pulses. The ancient rituals ease the transitions, the soft rain cleanses and refreshes; we are in rest and recovery, and the unknown road still stretches mistily ahead for us all. ‘We may not be taken up and transported to our journey’s end, but must travel thither on foot, traversing the whole distance…’ And in this small world we live in, we know we are in good company.

Wanting something light and easy, I found an old recipe for ten minute cheese soufflés. Separate the eggs and yolks of two eggs, and mix the yolks with salt, pepper, a pinch of cayenne and a little mustard. Mix in two dessertsps of grated cheddar cheese, and then fold in gently the whipped egg whites. Fill two thirds of well greased individual soufflé or ovenproof dishes, and bake in a hot oven for six to eight minutes until well risen and golden brown. Serve at once. This amount makes three to four small soufflés. I’m thinking they’d be a nice easy first course for dinner with friends.

I loved this foodie thought from writer Lawrence Durrell ( 1912 -1990): ‘The whole Mediterranean.. all of it seems to rise in the sour pungent smell of these black olives between the teeth. A taste older than meat, older than wine. A taste as old as cold water.’             Just reading these words makes me feel the heat, smell the scent of thyme and rosemary, and long to savour some strong red local wine beside a lapis lazuli sea….