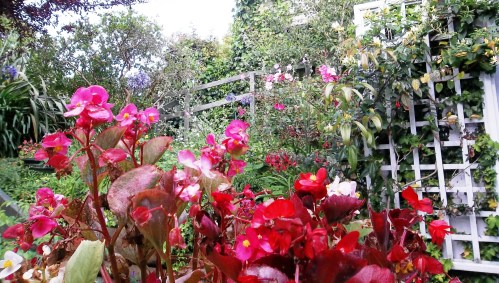 ‘Mummy doesn’t like carnations,’  the nine year old told him coldly, her information holding a world of meaning as she correctly assessed that the man at the front door was a suitor.

She was right, and though he persevered on that occasion, he never gave me carnations again. It’s a shame about carnations, but at the time I could only see the sad, scentless etoliated versions wrapped in cheap cellophane and sold on garage fore-courts. They symbolised the  capitalism and commercialism that exploits and corrupts even beauty.

The real thing has a big, heavy deliciously clove- scented head, with a tangle of frilly petals, and was originally used by the Romans for wreaths and garlands, known in Latin as corona. When these flowers first came to England with the legionaries nearly 2000 years ago, their name was coronation, until the word evolved into carnation.

I was just as dismissive about daffodils, when I was presented with a bouquet – or rather some bouquets – which I rather regret now. In my salad days when I was a twenty two year old in the army, and stationed outside a beautiful village in Shakespeare country, I was the only girl in an all male officers’ mess. I had my own little cottage where I lived with the mongrel I’d rescued and dignified by calling him Rupert.

Late one night there was a loud knocking, so I dragged myself from deep sleep, hurried on my pink dressing gown, and stumbled to the door.  Grouped there were all the young officers who had gone to watch a rugby match at Twickenham. It had taken them many hours to get back here, judging by the time – two o’ clock in the morning – and one of the things which had delayed them, apart from merrymaking at every pub on the way back, was that they had also stopped at every roundabout, it seemed, between my cottage and London.

Each roundabout they had stripped of its spring flowers, and here at my door was the result of their labours. Each young man was wearing a proud grin and holding a big bunch of golden daffodils in the moonlight. Sadly, I was not amused, deeply disapproved, and was more intent on getting them to go away, and stopping Rupert from barking and waking senior officers slumbering nearby, than in being grateful for their generosity at the expense of every town council between here and London!

So I did know how my three year old grand- daughter felt when I gave her a disappointing bunch of flowers. I’d chosen a big blowsy thank you bouquet  for her mother, and had as much pleasure in choosing the flowers as my daughter- in –law had in receiving them. My grand-daughter was also ravished by them, so I decided to walk back to the shop through the bitter Melbourne winter’s day and get her the little bunch of flowers I’d refrained from getting on the first visit.

I brought home a posy of exquisite purple violets, the perfect symbol, I thought, for my exquisite flower-like little grand-daughter. She took one look at the dainty flowers and burst into indignant tears, and then threw an uninhibited tantrum in which she expressed her un-utterable disappointment at not having a big grown-up bunch of flowers like her mother’s. Mortified, I could see her point.

Two years later a small posy of white rosebuds with one word ‘Mummy’ on Princess Diana’s coffin reduced half a world to tears.

The symbolism of flowers is far more profound that the sentimental Victorian descriptions of the language of flowers. The flaming red poppy, whose name is now synonymous with the word Flanders, is a poignant reminder still, of every young man who died in the terrible war that my grandmother called The Great War.

And in the next terrible war  flowers softened another battlefield. I remember my father telling me how the hills of Tunisia were smothered in glorious spring flowers as his tank regiment fought their way to join up with Montgomery’s army.

Bruce Chatwin painted an unforgettable image of flowers in that same war, in his book ‘The Songlines’. On the first page he wrote of a Cossack from a village near Rostov on Don, who was seized by the Germans to be carted off for slave labour to Germany. One night, somewhere in the Ukraine, he jumped from the cattle-truck shunting him and other captives away from their homelands and fell into a field of sunflowers.

Soldiers in grey uniforms hunted him up and down the long lines of yellow sunflowers, but somehow he managed to elude them. I can still see in my mind those rows of strong, towering green stalks and leaves,  great, yellow tangled- petalled heads benignly sheltering the fugitive crouched beneath.

I can never forget the endless fields of shimmering purple lupins alive with dancing blue butterflies, stretching along- side thousands of burnt -out tanks near Belsen concentration camp in Germany just after the war.  And I could never bear the pink rose bay willowherb, which grew on every English bomb site… the only plant that seemed to thrive in those derelict tragic places. They came to symbolise for me as a small girl, all the horror and sadness and destruction of the war I didn’t understand.

But perhaps the most powerful flower image of all, is that glorious girl on an American campus in the sixties, walking up to a row of armed, helmeted men, and tremblingly pushing a flower into the barrel of a gun pointed at her, her hand shaking slightly as she dared the outrageous.  A girl and a flower speaking the in-effable language of peace.

Sometimes home-made mayonnaise can seem a bit heavy, but I use a quick and easy French recipe to lighten it up, learned from my French neighbour. After making the mayonnaise, beat the white of an egg until stiff, and then gently beat it into the freshly made mayonnaise. It gives it a lovely creamy texture, and is particularly good with fish like freshly poached salmon. Another variation is to use a clove of garlic when making the mayonnaise and then add finely chopped avocado with the egg- white. This is a good accompaniment to the chicken mousse from the last post.

That is at bottom the only courage that is demanded of us: to have courage for the most strange, the most singular and the most inexplicable that we may encounter. That mankind has in this sense been cowardly has done life endless harm; the experiences that are called ‘visions’, the whole so-called “spirit-world,” death, all those things that are so closely akin to us, have by daily parrying been so crowded out of life that the senses with which we could grasp them are atrophied. To say nothing of God.         Rainer Maria Rilke 1875 – 1926  Austrian mystical poet