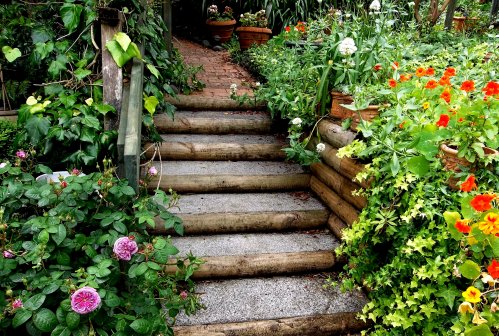 Follow your bliss, urged the great Joseph Campbell – this used to sound like heaven. Just doing everything you wanted!

Later – just slightly wiser- I supposed this heaven was probably self-actualization – which always sounded like one step below enlightenment, both impossible goals for the likes of me. But then I discovered that self-actualisation was not quite the Everest I had thought.

Research suggests that when people live lives which are different from their true nature and capabilities, they are less likely to be happy than those whose goals and lives match. So pursuing the elusive goal of this self-realisation means we feel more creative and happier, more ‘fully alive’, and ‘find meaning in life’.

And yet it seems to me that happiness isn’t the whole story, and fulfilling our needs isn’t either. Great souls like Nelson Mandela and Victor Frankl have been called self-actualising, and yet their needs can hardly be said to have been met in prison or concentration camp. But their capacity for living, love and forgiveness, wisdom and insight seem more saintly and more profound than the stories of many saints.

They both, like other so- called self-actualisers, had accepted who they were and where they were, and made the best of it, in giant, heroic terms. But self- actualising isn’t just for the heroic and the saintly, I discover, but can be for all of us. Maslow described the fulfilment of following such a path and as I understand it, his description of life as a fully- realised person would be something like this:
We would experience life like a child, with full absorption and concentration and joy and we’d try new things instead of sticking to safe paths; we’d listen to our feelings and inner voice instead being victim to habit and the voice of tradition, authority or the majority.

We’d dare to be ourselves – authentic, in Maslow’s word- and avoid pretence (‘game playing’). And we’d have the courage be unpopular if we didn’t agree with the views of the majority.

We’d take responsibility and work hard; and try to identify our ego defences and be brave enough to give them up, meaning to be honest with ourselves. This also means being vulnerable, which I don’t think Maslow mentions, but this to me, means having the courage to be tender and open hearted and to develop the capacity to feel deeply.

Apart from knowing that we are following our spiritual destiny in becoming the whole person we can be, the rewards seem to be a deeper enjoyment and engagement in life, a profound appreciation of the goodness of life, and therefore less stress and anxiety, and a genuine trust, in Mother Julian’s words, that all will be well.

It sounds like something we could all do, though when we have commitments to children, those duties have to be honoured first … otherwise becoming self – realised can seem more like self-centredness! Hindus recognise this stage of life as ‘householder’, before seeking their own ‘liberation’.

Those making this pilgrimage towards wholeness and authenticity often find that the path to freedom is not an easy one. That road less travelled may be pitted with puddles and pain-filled treks. And the person who’s throwing off the shackles of duty and listening to their inner voice may often be misunderstood or misinterpreted.

The stars that kept me on track as I have tried to walk this way were actually words from the sages and poets – and I have clung to them. From Ibsen’s belief in our ‘sacred duty’ to ourselves, to T.S. Eliot’s dictum that it is not our business what other people think of us, the words of literature – the logbook of the human race as one writer put it – pointed the way.

Trying to become a free person, letting go old self-defeating patterns of doubt and distrust, old fears – those critical inner voices that don’t serve us – means changing many things in our lives and in ourselves … and it’s not always obvious where this is taking us. Werner Erhard once said confusion led to a higher state of consciousness, a belief I have clung to, hoping it to be true!

These transitions take trust and courage and a belief in the goodness of Life. And I am learning that we have to listen to the voice of life and not be tempted by the easy way out – and never settle for less. To reach the end of our days and to realise that we had settled for less, for the sake of pleasing others or making life easier for ourselves, would be the ultimate betrayal of the gift of life.

Loyal, loving friends support us – where would we be without our friends? But in those dark moments which we all have to endure alone when we try to walk this path, the words of Oriah Mountain Dreamer can sustain us.

She wrote: “I want to know if you can disappoint another to be true to yourself. If you can bear the accusation of betrayal and not betray your own soul. If you can be faithless and therefore trustworthy.” (Warning : this hurts !) One friend said to me: “I feel stripped”, as she picked her painful way along the path. And it’s only by staying fully conscious and hanging on to all our reserves of courage that we can reach the end of this road victoriously.

When we strike out, off the beaten track, it can push the buttons of others, living safe conventional lives, sticking to conservative values, and maybe not wanting to tread any but the known way – and maybe feeling uncomfortable when confronted with uncertainty or risk.

But to be free is to stride fearlessly into and through a cloud of unknowing – as the beautiful, extraordinary and self – actualised Helen Keller amazingly said: ‘If life is not an adventure then it is nothing at all’. So like so many others, I have had to step out of my constricted and uncomfortable comfort zone in order to be free. And just as Eliot said it’s not our business what others think of us, so he might also have said that we cannot expect to be understood either.

The words of another poet, Montrose, encourage travellers to find the courage to take what seem like huge steps into the unknown with his words:
He either fears his fate too much,
Or his deserts are small,
That puts it not unto the touch
To win or lose it all…

And so though while we are in process, we may think we have lost all to win all – or maybe in the words of the Spanish proverb – have taken what we wanted and paid for it – freedom is worth the price. It’s freedom from self-limiting beliefs and doubts and from compromising with our own truth and inner knowing. It’s daring to open our hearts, do the unthinkable, find new ways of being, connect with the beating heart of the world and know that when we take these terrible risks, somehow the universe supports us.

So yes, such a life is an adventure, and also laughter and love and truth and beauty, friends and fun. And now I think this is what Joseph Campbell may have meant when he said follow your bliss.

I’ve sometimes thought I could/should write a cookery book called a million ways with chicken – an exaggeration perhaps – but not far off!
I love chicken recipes, and this one I acquired over forty years ago from Clement Freud (yes, Sigmund’s grandson) when he was in his heyday.
It’s a cold mousse, and you need eight ounces of cooked, chopped chicken, two ounces of butter, three eggs, three ounces of fresh white breadcrumbs, three table spoons of dry sherry, quarter of a pint of single cream, salt and nutmeg.
Melt the butter in a large basin over a pan of boiling water. Pour in the cream and breadcrumbs, salt and a good pinch of nutmeg and stir for about five minutes until the mixture thickens. Beat the eggs and sherry together, and add to the basin, followed by the chopped chicken.
Pour this mixture into a buttered soufflé dish, cover with foil and bake in a moderate oven until firm – about half an hour. Let it cool before serving. Freud recommends serving it with a slightly garlicky mayonnaise with mashed avocado added, and for a really creamy texture stirring in a stiffly beaten egg-white.
It’s all rather delicate and delicious.

35 responses to “Following your bliss”